The city home of the famous 15th century financier.

The "Grant'Maison" of Jacques Coeur, financier to king Charles VII, was built in the mid-15th century and is one of the most beautiful examples of Gothic civic architecture in France. The relatively unadorned western facade, built on the Gallo-Roman town walls, contrasts starkly with the richly decorated eastern facade overlooking the street.
The Palais Jacques Coeur is a fine example of the Flamboyant style of the late Middle-Ages and its attention to the comfort of the inhabitants prefigures the great residences of the Renaissance. 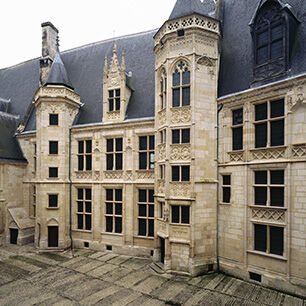