COVID 19: IN COMPLIANCE WITH THE MEASURES TAKEN BY THE FRENCH GOVERNMENT, THE MONUMENTS WILL BE CLOSED FROM OCTOBER 30TH AND UNTIL FURTHER NOTICE.

A unique experience in the largest fortified enclosure in France.

Carcassonne was settled as early as the 6th century BC and later became an important Roman town. It was fortified in the 4th century and was a strategic site in the Middle Ages. It took on its definitive shape in the 13th century with the king’s decision to construct the distinctive double-walled ramparts and extend the castle. The city was restored by Viollet-le-Duc in the 19th century and is a testimony to 1,000 years of military architecture and 2,500 years of history. See a 12-minute film combining 3-D images and close-up footage; walk  along ramparts and enjoy an exceptional view over Pyrenees and Black Mountain.

New! Walkabout performance every evening from 1st to 31th August.

Private visit, with or without catering service, outside standard opening hours 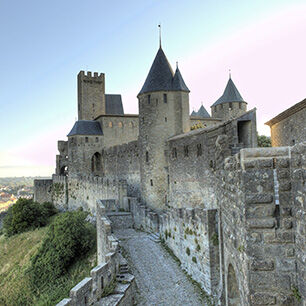